OUR HOLIDAY DEALS ARE AVAILABLE NOW WHILE SUPPLIES LAST 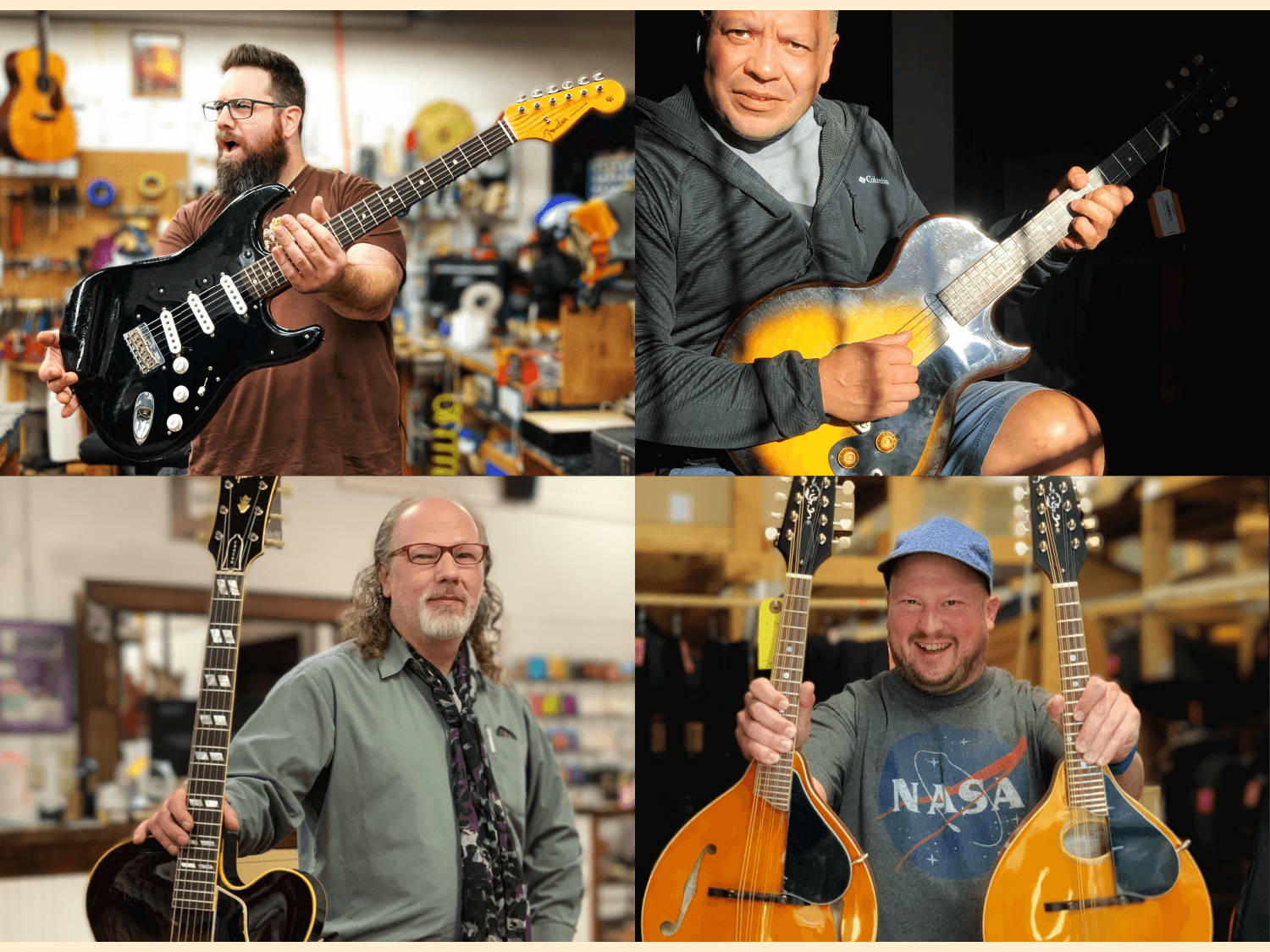 What are your hours?

Contact us regarding reduced hours on the days before these holidays.

Our main contacts can be found on our Contact Us Page

You can also email our sales staff at web@elderly.com or click the message box in the bottom right-hand corner, to live chat.

What do you mean by “instrument setup”?

Setup is the process of ensuring that an instrument functions, plays and sounds its best.

All of our instruments are fully inspected and set up by the experts in our repair shop, except those marked AS-IS. You can learn more about the particulars of our setup process in the second section here.

Do you set up your instruments?

All of our instruments are fully inspected and set up by the experts in our repair shop, except those marked AS-IS. You can learn more about the particulars of our setup process in the second section here.

Do I need to make an appointment?

Walk-in customers are welcome! No appointments are necessary but we recommend calling ahead if you plan on dropping off an instrument for repair or appraisal.

You can find more information and hours on our Sell, Trade, Consign and Appraisal Page.

Do you offer written appraisals?

Yes, we charge $50 for most written appraisals. Click here for details and exceptions.

Do you offer curbside service or in-store pickups?

Yes, give us a call and we’d be happy to help arrange your order.

Do you require masks and/or other protective measures?

We do not require customers to wear a mask at this time. We continue to have masks available for those who are unvaccinated.

What other measures have you taken regarding the COVID-19 pandemic?

In the summer of 2020, we updated all 11 of our HVAC systems to include UV air filtration (which are professionally inspected twice a year). While not in regular use at this time, we created a UV booth to sanitize the surfaces of our instruments, which is still available by request. Hand-sanitizer is readily available throughout the entire Elderly building.

Are customers able to play the instruments that are on display in the showroom?

Yes, of course. This has been the Elderly way since 1972. We believe that instruments are meant to be played. Items in our Vault are available to be played upon request.

What qualifies an instrument as vintage? What differentiates a vintage instrument from a used one?

Used instruments are instruments that have been previously owned. Vintage instruments are those made further in the past. Generally this could mean at least 20 years old, and often as old as 200 years or more. People may have differing opinions on whether an instrument is used or vintage.

At Elderly Instruments we do not differentiate between used and vintage instruments when presenting them on the website.

If I purchase an instrument from Elderly Instruments, is there a warranty included?

New instruments are covered by the manufacturer's warranty as well as a limited warranty from Elderly Instruments.

Used instruments are covered by a limited warranty from Elderly Instruments.

Find out more on our warranty information page.

What does it mean when an instrument is listed as “AS-IS?”

These instruments have not gone through our repair shop for set up, and are not eligible for our usual warranty program. Any instrument listed “AS-IS” means it is for sale in the specific condition described. We try to include any obvious repair or other work that the instrument may need, but it is not always possible to know what additional work may be required once a repair is in progress.

What do I do if I can’t find the instrument I’m looking for?

You can fill out our "Want File" the used instrument request form and we will do our best to contact you as soon as one comes in.

What sets Elderly Instruments apart from other instrument retailers?

As a small (family owned) business we CARE about getting the right instrument in your hands:

Community-Driven - Our community drives us to provide the best experience possible.

Authentic - You can trust in us to find the best fit for your needs.

Respectful - We have great respect for our customers and the time they spend with us.

Expertise - Our collective knowledge and the way that we share it sets us apart.

Our repair shop is one of the best in the world with over 100 years combined experience in a wide variety of fretted instruments. We carefully inspect and set up each instrument to make sure it will be easy to play and sounds its best.

What are the different types of guitars?

At Elderly Instruments the main types of guitars we see are:

Classical and other nylon-strung guitars

Many other variations exist that we see occasionally, including Banjo Guitars, Tenor and Plectrum Guitars (4-string), and other hybrids.

How many strings does a guitar have?

Most standard guitars have 6 strings. Various hybrid and other guitars can have 4, 7, 8, 10 or more strings.

What are the best guitars for beginners?

It’s always best to learn on a good instrument. First, that means one that is set up properly for ease of playing, sound and function. This is why at Elderly Instruments we place a lot of emphasis on the fact that all of our instruments are fully inspected and set up by the experts in our repair shop, except those marked AS-IS. You can learn more about the particulars of our setup process in the second section here.

For more information and some recommendations, take a look at our Acoustic Guitar Buying Guide

I’m a beginner. How much should I spend on a guitar?

Honestly, as much as you are comfortable spending. Once a guitar is properly set up, what you get in a more expensive instrument is better sound, which is due to premium materials, design, and workmanship. Primarily, as a beginner, you are more likely to receive more positive feedback as you practice and play on a better sounding instrument.

Our sales staff can advise you on “best instruments for the price” if you give them a general price range you would like to be in.

For more information and some recommendations, take a look at our Acoustic Guitar Buying Guide

I’m just learning how to play the guitar, where would you recommend I start?

What is a banjo?

Take a look at our banjo offerings

What are the different types of banjo?

Most common are 5-string and 4 string banjos. 5-string banjos have 4 equal length strings and one short string. These are most typically used in playing traditional styles of music such as folk, string band or bluegrass. Banjos like this were first used in “minstrel” bands that were popular from the 1840s until the end of the 19th century. All banjos with a short string like this were derived from various African instruments which were either brought here on slave ships or constructed here (most likely) by black people of African descent.

4-string banjos appeared in the 1880s and got popular in the early 20th century. They were and are used to play early Jazz, Dixieland and other music. Incorporated in early recorded Irish music, the shorter-necked tenor banjo has found a home in the Celtic music revival that first appeared in the 1960s and ‘70s.

Check out our entire banjo selection

How are banjos tuned?

Other tuning may be used for different purposes.

Browse our selection of banjos

I’m just learning how to play the banjo, where would you recommend I start?

What are the different types of mandolin?

The two main categories of mandolins are bowlback and flatback mandolins.

Bowlback (often called Neapolitan or roundback) mandolins achieved their height of popularity in the 1880s and were primarily used for classical music, often in an orchestral setting with mandolas, mandocellos, and other instruments. Mandolin orchestras are still in existence today in Europe and throughout the world.

“Flatback” mandolins are used for many kinds of popular and folk music and are the most common mandolins today. “Flatback” is a bit of a misnomer, since the most common mandolins are arched top mandolins, often with carved top and back construction which is inspired by violin family instruments. These mandolins come in two basic styles: the Florentine or F-style, which typically has a decorative scroll near the neck, two points on the body and usually a scroll carved into the headstock. The A-style, which is pear-shaped, has no body points and usually has a simpler headstock.

Much variation exists between different makers, and other variants have become increasingly common. Generally, F-style mandolins and mandolins influenced by that design are strongly associated with bluegrass music, while the A-style is associated with other types of music.

How many strings does a mandolin have?

Typically a mandolin has 8 strings consisting of four courses of doubled metal strings that are tuned in unison. Five (10 strings) and six (12 string) course versions also exist. The courses are typically tuned in an interval of fifths, with the same tuning as a violin (GDAE).

How do you tune a mandolin?

GDAE (low to high). For more info check out Elderly Instruments’ How to Tune A Mandolin Blog!

What is meant by “Mandolin Family Instruments?”

Like the violin, the mandolin is the soprano member of a family that includes the mandola, octave mandolin, mandocello and mandobass. Browse our mandolin family of instruments.

I’m just learning how to play the mandolin, where would you recommend I start?

The Elderly Instruments Mandolin Outfit has everything you need to get started.

What is a ukulele?

The ukulele is a Hawaiian 4-stringed instrument that has gone through several periods of worldwide popularity since 1879 when 3 immigrant Portuguese cabinetmakers disembarked in Hawaii. They quickly spread the joys of small Portuguese guitar-like instruments, began making and selling them, and the ukulele (in Hawaii pronounced OO-koo-LEH-leh) was born.

What are the different types of ukuleles?

Ukuleles come in a variety of different types, including but not limited to, soprano, tenor, concert and baritone. Feel free to browse our ukulele selection for even more options!

How many strings does a ukulele have?

I’m just learning how to play the ukulele, where would you recommend I start?