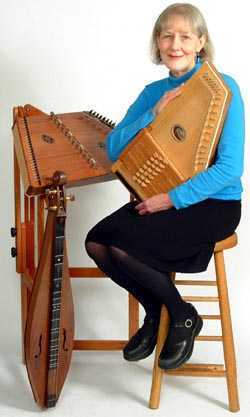 Wanda Degen is an experienced music teacher and performer having taught hundreds of people how to play the autoharp and mountain dulcimers in a career spanning over a quarter of a century. Longtime Lansing based, Wanda has traveled as far as Denver, Colorado (Swallow Hill School of Folk Music), Chicago, Illinois (Old Town School of Folk Music), Duluth, Minnesota (Dulcimer Days II) and Newport, Pennsylvania (Mountain Laurel Autoharp Gathering) to teach. She has taught private lessons at Elderly Instruments since 1978. In 2005 she began teaching group classes at the MSU Community Music School. Wanda is frequently found as a workshop instructor at the Hiawatha Music Festival in Marquette, the Original Dulcimer Players Club Funfest in Evart, and the Wheatland Music Festival in Remus.

Key performances in Michigan include Isle Royale National Park, Beaver Island, Mackinac Island, and winning the Great Lakes Regional Mountain Music Autoharp Competition at the Flint Bluegrass Festival. Wanda has also placed as a finalist at the Walnut Valley Festival autoharp contest in Winfield, Kansas, and presented a program at Carnaun, a country school in County Galway, Ireland. She performs traditional and contemporary folk, Celtic, Great Lakes, and original music. Concerts may be as a soloist or with one or more of many music partners, including Doug Berch, Taia Degen-Repas, Kitty Donohoe, Dan Giacobassi, Tahmineh Gueramy, Karrie Potter, Pooh Stevenson, Pete Wittig and Neil Woodward.

Wanda has worked with the Wolf Trap Institute for Early Learning Through the Arts, based in Vienna, Virginia, since 1989. As a Michigan Wolf Trap Teaching Artist she conducts workshops and residencies training teachers of young children to incorporate the performing arts into their curriculum. In 2006 she began training with the Lincoln Center Institute of New York through the Michigan Art Project and is a Teaching Artist with the Lansing School District. Wanda is the music teacher for a number of nursery schools, preschools and daycare homes in Ingham County. And, as if life weren't full enough, she has enjoyed being the Performance Coordinator for the East Lansing Art Festival since 1987.

Wanda has two recordings available on her own label: The Valley of Abundance (all instrumental, mostly traditional Celtic music) and Of Woods and Water - Songs of the Great Lakes Region. She is also honored to be included on Autoharp Legacy, a 3 CD set featuring 55 master harpists from around the world.