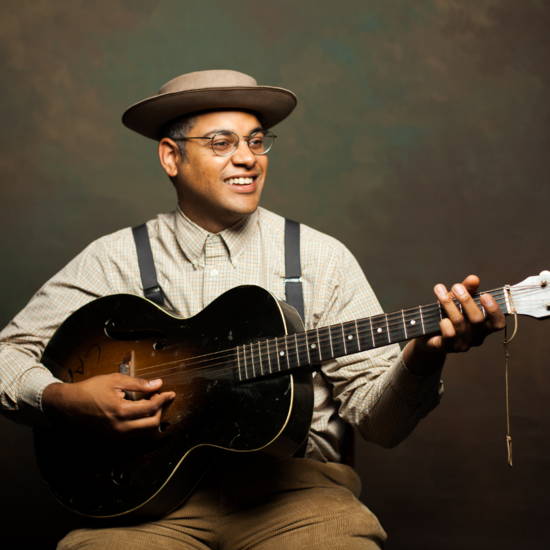 Black Cowboys:
A Workshop and Song Share with Dom Flemons

A Free Virtual Event in Partnership with Wharton Center

The result of tireless research and work, this album pays tribute to the music, culture, and the complex history of the golden era of the Wild West. In this single volume of music, the first of its kind, Flemons explores and re-analyzes this important part of our American identity. The songs and poems featured on the album take the listener on an illuminating journey from the trails to the rails of the Old West.

In this workshop, Dom will take us on a deep dive into a few of these songs. While sharing stories about the songs themselves and his research we will learn about Dom's process as a scholar and artist.

In 2018, he had his major solo debut at the Grand Ole Opry, on a night with Carrie Underwood and Old Crow Medicine Show, and has been included in the American Currents Class of 2018 exhibit at the Country Music Hall of Fame Exhibit alongside Reba McEntire, Jeannie Seely, Chris Stapleton, Molly Tuttle, Carrie Underwood, Keith Urban, Kane Brown, Dan Auerbach, Dan + Shay, John Prine and more. He was the first Artist-in-Residence at the “Making American Music Internship Program” at the Smithsonian National Museum of American History in the summer of 2018.

Register for this FREE workshop via email ryonn.clute@whartoncenter.com